Overview of my smart home: The bedroom 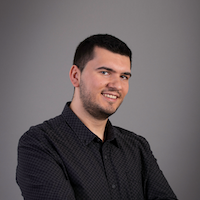 I haven't finished automating my house and I don't think I ever will. For me, this is a hobby, so there will always be some new gadget or I'll have a new idea that could make my life easier.

One of the joys of implementing all of this is sharing it with the world, and a few months ago I wrote the first article in this series where I talked a bit about my home. Now, I want to go into greater detail and talk about everything I did in the past year with Home Assistant. I kept thinking how to categorize this in multiple blog posts because one would be too much, and I finally decided to go room by room.

In each post you'll see what automations I implemented, what devices I purchased and how much I paid for them. I know that pricing matters when you're starting to create a smart home, so I want to be transparent and also mention which purchases I regret and which I don't. The detailed costs are at the end of the article.

Now, let's start with the bedroom.

I still think that physical switches are useful because they are a lot faster than voice commands or opening the Home Assistant app. In the bedroom I have 2 smart switches which are Xiaomi Zigbee buttons, and 1 Philips Hue remote.

I have one Xiaomi button right on top of my old light switch: 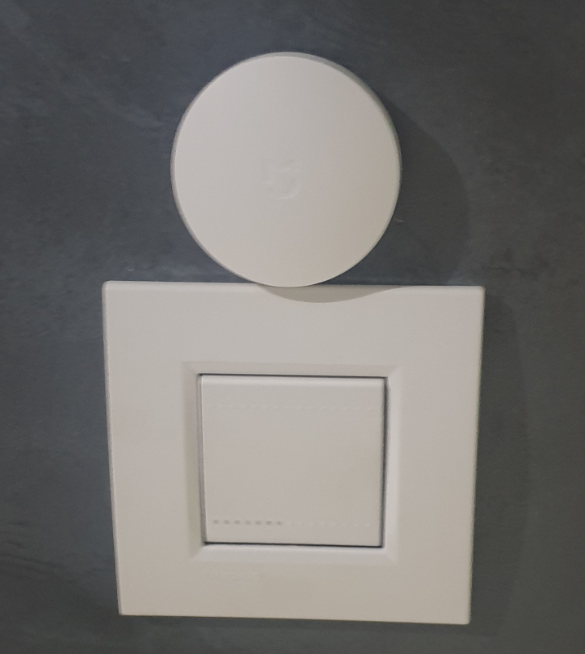 On top of my bed, I have the other Xiaomi button and the Philips Hue remote. You can't see them from this photo because they are out of sight, but I wanted to show you that I placed them above my head, so me or my wife just have to reach up to control them.

Keep in mind that a plain physical switch might not be as fancy as voice control or an app, but it is a lot faster and you'll use it more often if it is placed in the right place. 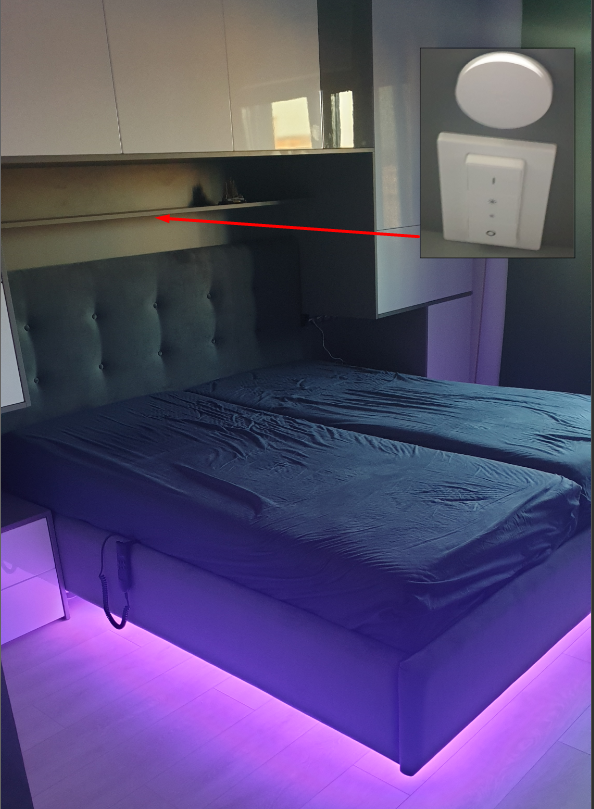 The Xiaomi buttons allow you to map actions for 6 events, these are:

You can see these configured in Node-Red here: 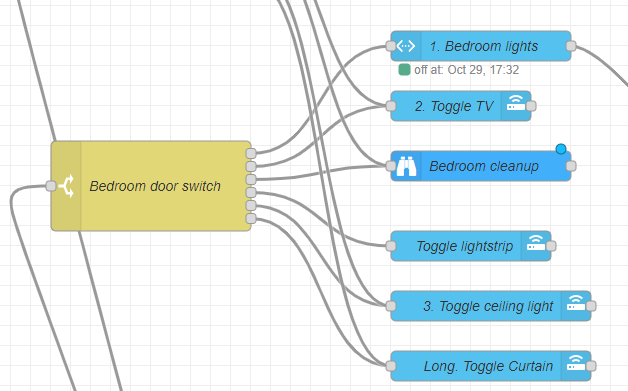 The Hue remote has 4 buttons that I use to control my lights, on/off and +/- for brightness. The remote is paired directly with the lights so even if Home Assistant is down this means I can still control my lights. This means that the light responds instantly as well, so if you have Zigbee lights and switches, try to pair them directly. The Xiaomi buttons can't be paired with other devices, so each time I press one of them they first have to wake up, communicate with the Conbee II stick, then with Home Assistant, and then I can process the command, so in the end it's always 1-2 seconds slow.

I still have the "dumb" light switch near the door and I plan to use Shelly 1L when it will be available to make it smart. The problem with my initial light switches is that they don't have the neutral wire which would keep the device powered when the light switch is off. Shelly 1L should solve this, so I plan to buy a few and test them in the following months.

I use motion sensors to trigger lights in other rooms, but not in this one. Our kids sleep with us in the bedroom and turning on the lights in this room is something we're very careful with, because we don't want to wake them up by accident. People with kids will understand :)

This is one of the best ideas I've had because our bedroom window points to the east, so each morning the sun light fills the entire room and wakes me up every time. Using Node-Red, I have the following automation in place:

The curtain can be controlled by voice with Alexa and Google Assistant, but I can also do a long press on the two Xiaomi buttons to toggle it opened or closed.

In the bedroom we have our old TV that we bought ~5 years ago, which is not smart. Our son chewed the remote control ~4 years ago and broke it, so ever since we use a Chromecast to control it. We usually use voice to turn it on or off (Google Home Mini), and I bought a BroadLink remote that can send the most important commands like volume, on/off, change source, etc. We use the Hue Remote that I mentioned earlier to control the TV volume with the brightness buttons. So, if I press the "+" button for brightness, then an event will be triggered in Node-Red and I use this to call the BroadLink remote with the command to increase the volume.

When my daughter was born this year, I used this opportunity to create a baby monitor using some parts that I had lying around: a Pi Zero with motionEye installed, a Hue motion sensor and an old Logitech web cam. After a while I bought a Pi camera because it has night vision.

For easier control, I created a card in Home Assistant for the baby monitor. It includes the camera feed and a few buttons. 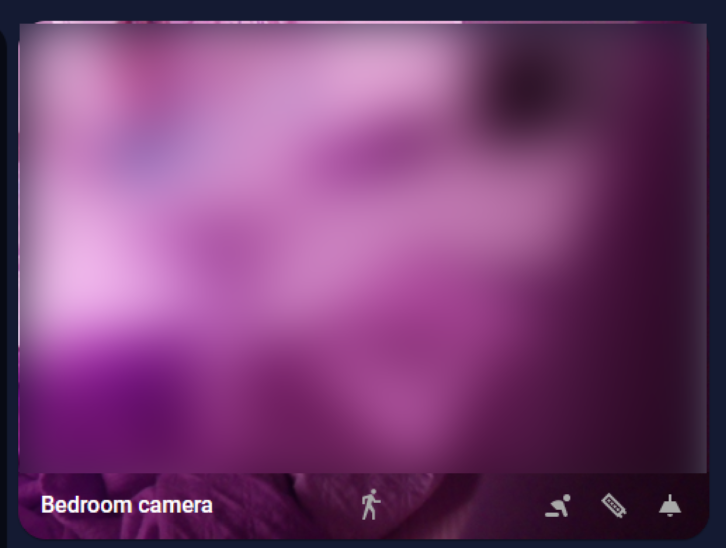 I blurred the camera feed, but on the bottom line you can see a few buttons. The one from the center is the motion sensor. The color will turn white when motion is detected, and when I click on it, I can see the history of the sensor. On the right there are 3 more buttons. The first one enables notifications for the motion sensor. The second one is for the light strip and the 3rd one is for the ceiling light, so we can toggle them with one click.

In this way I can watch a movie with my wife in the living room without being worried that our daughter is awake and we don't hear her crying. Then we can open the camera feed in Home Assistant and see if she's really awake or she just turned on the other side.

I'd like to have a better way of detecting how many people are in the bedroom and who they are, so I can create more precise automations. I started to play with Azure Cognitive services so I can use the feed from my camera to detect and identify faces. It's still a work in progress but it has potential.

I have a multi split unit from Gree, and I managed to find a HACS component for it. This allows me to control the AC from Home Assistant, Alexa but I also have some automations that control it by themselves when the "auto climate" switch is on in Home Assistant.

I have underfloor heating in my home but it's not smart. I only have some thermostats on the wall in some of my rooms that control the heating for those rooms independently. This week I should receive a bunch of Shelly 1 devices which I hope will help me make the heating smart. Either I'll succeed, or I'll break my heating just as winter is around the corner, so wish me luck!

We have an Echo Dot which is mostly used by our son to play music. We use the Google Home Mini because it can directly control the Chromecast. Both devices can control most of the devices we have in our home, but we mostly use Alexa.

I want to make Alexa ask me if she should trigger any actions. For example:

"It's been 2 days since you vacuumed the bedroom, would you like me to call Roborock now?"

"The temperature is over 25 degrees, would you like me to turn on the AC?"

This can be done with Alexa Actions, I just have to find time for it :)

In the next year however I'd like to give up Google and Alexa, and instead use Almond & Ada. The reasons are obvious, I want better control and I want to own my data, so it's about privacy as well.

Future plans for the bedroom 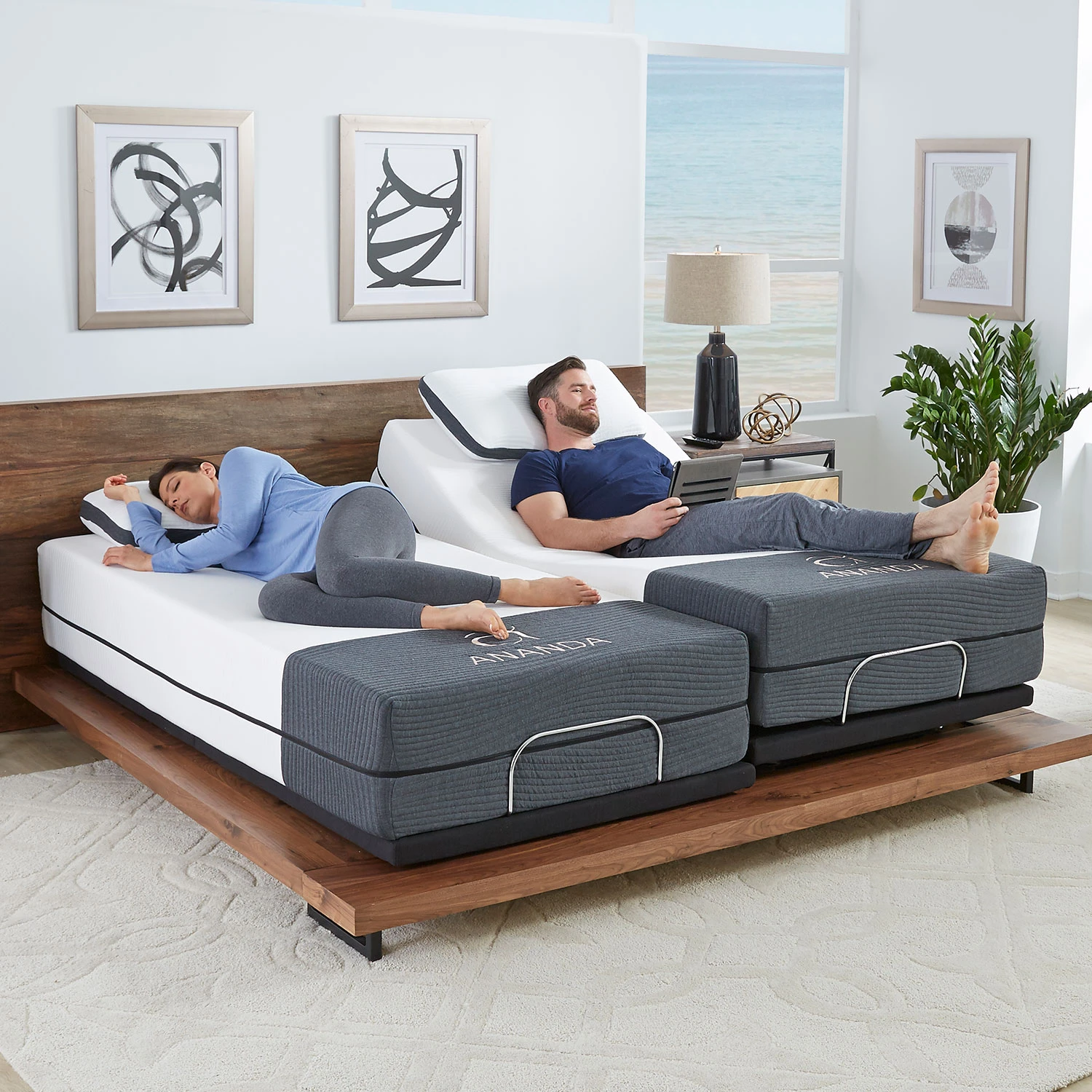 The curtain will close, lights will be dimmed, and I can just eat my snacks and watch the movie :D

Overall, the bedroom was one of the most expensive rooms, with a total of ~868 $. After all this time I think the top 3 devices/automations that make my life easier in this room are:

In the next article I'll talk about my office, where you'll see how Home Assistant is also a Work Assistant.